#March4Me but marching towards what?

#March4Me but marching towards what?

Yesterday, 785.000 of us marched for the climate worldwide. The largest climate mobilization in history. It was about time…. And I regret that no more people joined, because at the end of the day, this climate change will impact all of us, and not just globally, also individually. But to all people who were there, like in Amsterdam under the rain, the wind and the cold, I say thank you. Thank you for understanding the importance of what we are doing here. 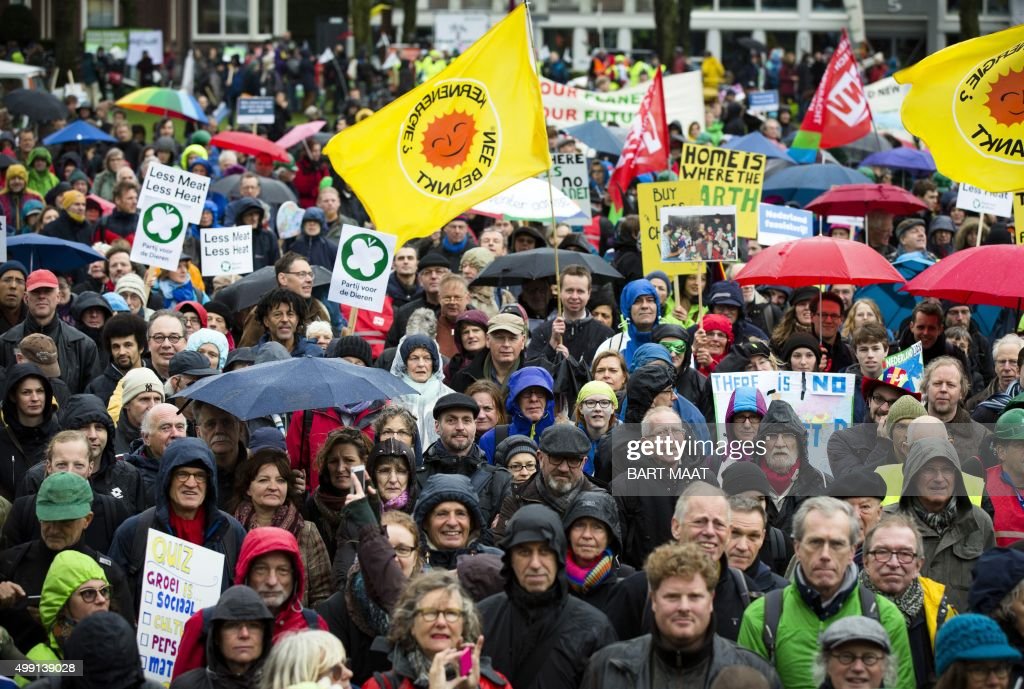 The only problem is that 1M people still represents less than 0,2 % of the world population. I am not a statistician but it seems to be far from representing a majority.

So I was wondering how the politics would look at it during the COP21.

Country 1: “Ok guys we have about 1M people in the world who really wants us to change the way we handle climate topic and they demand us to make serious decisions.”

Country 2: “Yeah I saw that on the news. Well, I agree I think we should do something I mean we will face a much bigger crisis in 10 years if we don’t act now.”

Country 3: “True, and look at what’s happening in Syria right now, we’re all aware of the fact that what triggered the current crisis is linked to the migration of climate refugees. Maybe we will have more of that in the coming years; tensions, crisis, refugees, violence, civil wars…”

Country 4: “Listen guys, I agree but we already are in the middle of an economic crisis right now. More unemployment, more insecurity, more debts and some countries haven’t established proper democracy yet… Sorry guys” — looking at Iran, Chinese, Saudi and other leaders.

Country 5: “Ok, I suggest we try to establish the different scenarios and see what could work the best. So we have only 1M people very concerned by climate issues and if we do nothing we will maybe have to may face a negative public reaction. The problem is that changing the way we consume, produce and circulate will cost money. Big money.Does it worth it for such a small movement anyway? And who’s in?”

Country 6: “Huh, sorry but I am out, I already need to face a debt and political crisis. I can’t invest 1 single euro. You have to help. As you said, the movement is rather concentrate and in my country the mobilization was relatively small. For now I have other concerns so unless you give me the money to change, I won’t commit to anything.”

Country 3 : “Yes but on the other hand, we have also 93M people in the world that live with less than 2$ per day. And this population will be the first impacted by climate changes. Some of them are already experiencing difficulties because of it. We are the leaders of those populations, we also need to consider that by not acting, the situation will rot in the coming years and we will never get out of this crisis!”

Country 6: “Sure, but I probably won’t be here in 5 years! And I will have enough money to retire. So not my problem!”

Country 8: “I have an idea, let’s just what could realistically work. So we all know that we have to decrease our greenhouses gas emissions by 75% if we want to really slow down the global warming by only 2°C right? That means that the industries need to change drastically. Especially transportation. We need to invest massively in different energy sources.”

Country 9: “Wait wait wait, the oil is really cheap these days. People are very happy about it, it is maybe the only positive thing that people see in the news those days. I don’t think I can make them pay double or triple to make them use a cleaner energy source. I’ll get a riot on my hands.”

Country 10: “Agree, we will have to face a much bigger mobilization than the climate march if we start increasing oil prices in order to develop renewable energies. People won’t pay. Same for the food industry. If I start to only allow local and bio food in the supermarkets, the prices will rise. I will face a massive problem.”

Country 3: “Ok so what do we do to change the world without making our populations pay?”

Country 8: “We could tax companies.”

Country 12: “Yeah, great idea dude, you know what is going to happen, they will raise

their prices not to lose their margins.”

Country 8: “Damn! Yeah you’re right. Ok so I don’t see what we could do. People keep on talking about the fact they want us to act but no one is really ready to pay for this change. I don’t think we can find a very efficient and drastic solution. You know how it is, the Kübler-Ross model and all, first deny, and then anger, then acceptation and finally happiness?”

Country 13: “Indeed, I know that model. Well I guess we are now in the anger phase. 1M in the streets for the climate, we are lucky it could have been more! For now the anger phase seems relatively easy to handle. They’ll come to the acceptance phase with time and weariness.”

Country 1: “Let’s do a vote. Who thinks we should push drastic changes, maybe face economic and political crisis because any change comes with difficulties and invest huge money to act for the climate? Or who thinks we need to wait next year to see in the social pressure gets stronger?”

This was just a caricature dialogue of course but I guess it won’t be so far from the reality.

To me, this march for the climate is great and I am very happy we managed to gather and get coverage. But this is late, and still too small… Governments won’t act because of an almost million people in the streets. Chances would have been higher maybe if more people would have gone down the streets too. And still, looking back in History, we clearly see that politics don’t necessarily act after mobilization acts.

So please people, marching is good and I strongly encourage we keep doing this, but keep in mind that this needs to be changed into actions, and only we can make this change happen, not the governments, nor the corporations.

I’ll give you an example of a  few actions that could really do some good on the planet:

This is a very short list of simple gestures that can mean something if we all do them. Marching is one thing, acting is what will show our determination to governments, politics and corporations.

So let’s save the planet, let’s act for it and let’s stop waiting for the politics to do what we need to do… ACT.

5 countries, 5 Halloween traditions, to get inspiration from

Read More
5 countries, 5 Halloween traditions, to get inspiration from

What “good” way to encounter Whales Sharks in the Maldives ?

Read More
What “good” way to encounter Whales Sharks in the Maldives ?
Comments
Submit a Comment

This site uses Akismet to reduce spam. Learn how your comment data is processed.

These colorful tiles are the representation of the

A #nature retreat for an evening swim looking at #

After long absence we are back! Our #travelblog is